Our 470 Sundancer is destined to be an instant classic. How do we know? Because it is packed stem to stern with winning design features and innovations, including standard Zeus 360-degree Control pod drives with an intuitive helm joystick for stress-free docking. Plus, there is an enclosed helm with two independently retractable sunroofs, offering the ultimate in weather protection and climate control. This luxurious Sundancer will change the way its owners boat forever, guaranteed.

The Sundancer line is epic in the world of boats; it boasts an incredibly popular list of models built by an incredibly popular manufacturer, and despite being around for decades, remains a top choice among power cruisers and day-boaters in every corner of the country. Why? Because Sundancers offer both utility and luxury, along with a heaping dose of value. But model lines get old. Usually, after a decade or two they get retired. In this case, however, they just get better.

You want proof? Just take a look at the new ure, it carries the same old name. But this boat is as modern as sport cruisers get, with the latest in styling, design, and technology. It looks nothing like the Sundancers of yesteryear; instead of a bridgedeck enclosed either by fiberglass or canvas, this one has windows all around, a monster sunroof overhead (which hums open at the press of a button), and a glass aft bulkhead that slides open to connect the cockpit with the cabin. Natural light floods into the lower cabin via an atrium over the companionway and galley, and five hullside ports bring in even more sunshine. Modernity can also be found in the boat’s mechanical systems. Yes, you can get the 470 with standard V-drives, but opt for the twin Zeus CMD QSB 480 pod drives. You’ll enjoy joystick control along with featuSres like Skyhook virtual anchoring. A pair of Raymarine e125 Widescreen MFDs grace the helm. SmartCraft VesselView digital display comes standard, and the entertainment system has everything from a gaming system port to an iPod docking station. 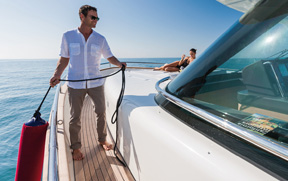 With the widest selection of top brands, we'll find the boat that is just right for you.
View Our Brands and Models 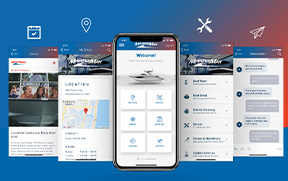 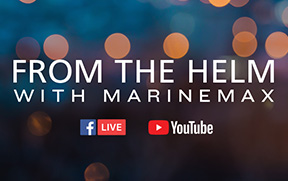 To save this boat or event and keep it easy to find, you'll need a My MarineMax account. Sign In or Register to get started.